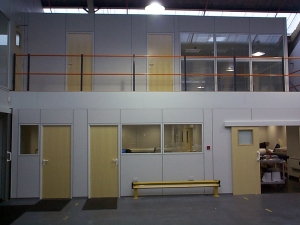 We were approached by our client in Wellingborough with a unique requirement for their mezzanine floor.  The company needed an office for their Production Manager with complete visibility over the production floor.  As space on the floor was constricted, the only option was to have  a mezzanine floor installed to house the production office and an area within the production facility had been identified.   The production process included the use of both a conveyor belt that couldn’t be moved and a crane that operated up to 3.2 metres high, both of which operated underneath the proposed mezzanine site.  The design of  both the mezzanine floor and office, therefore, needed to comprise the following features:

Cubex Contracts designed and installed the floor in March 2014 to the above specifications.  The new floor was built to 3.8 metres high with a 60 minute fire rated suspended ceiling and fire rated column casements to provide the recommended fire protection as per the building regulations.  The floor has 5 windows in 3 directions giving visibility across 80% of the production floor.  The grid has successfully cantilevered the conveyor and the crane is able to operate beneath the floor unrestricted.   The windows were installed with double glazing and insulation was installed above the office ceiling to further support sound reduction, with Composite partitioning being used to create the enclosure as it can be built from one side.    Additionally an electrical supply and lighting were added to the office enclosure to enable it to operate as a working office and a timber laminate flooring laid to allow for easy cleaning.

About the Author: Frances

Frances MacKenzie joined the Cubex team in 2010 and as our fearless Commercial Director, she concentrates on the development and strategic growth of the business, as well as overseeing the administration team. Having a background in the sales and service industry Fran dislikes sloppy service delivery and bad communication. She simply won’t tolerate it, and despite being a very busy lady she still has time to keep her eye on everyone ;) You can often find Fran on site, in her pink safety boots and hard hat consulting with a client on the range of finishing touches for their new space. When she’s not on site she can usually be seen doodling in one of her posh notebooks. Cubex Contracts specialise in refurbishment projects for Office and Warehouse environments including Mezzanine floors, partitioning, suspended Ceilings, Racking design and supply, Space planning, interior design and furniture. 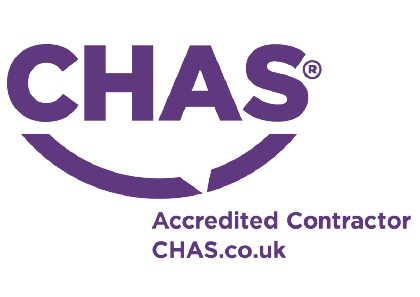